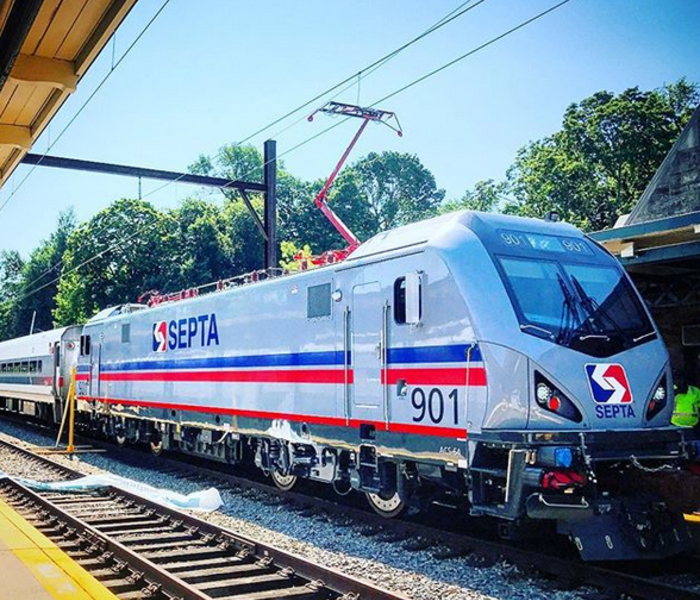 SEPTA is taking a major step forward in its overall effort to enhance Regional Rail service with the introduction of the Siemens ACS-64 electric locomotives.

On Wednesday, July 11, 2018, SEPTA executives gathered with Siemens representatives, elected officials, and other dignitaries to celebrate the arrival and inaugural revenue service operation of the new ACS-64 locomotives. The purchase of the new locomotives was made possible by Act 89, Pennsylvania’s comprehensive funding transportation bill.

The new vehicles are designed for improved reliability and increased service availability.

“Without Act 89, long-needed fleet upgrades like this simply would not be possible,” said SEPTA Board Chairman Pasquale T. Deon, Sr. “These are the types of projects that keep people, goods and services moving and are critical to the growth and economic vitality of the region and the state.”

SEPTA is purchasing a total of 15 ACS-64 electric locomotives from Siemens.

Built at Siemens’ Sacramento, California rail manufacturing hub, the 15 new ACS-64 electric locomotives will allow SEPTA to expand its fleet while replacing eight aging locomotives, including the last remaining AEM-7 locomotives still running in the country. As part of an ongoing effort to increase capacity, the Siemens locomotives will be in service with SEPTA’s existing rail coach cars and eventually will be paired with a new fleet of multi-level coaches that have been ordered from CRRC MA Corp.

“SEPTA’s Regional Rail Ridership has grown by more than 50 percent over the last 15 years,” said SEPTA General Manager Jeffrey D. Knueppel. “The addition of these new Siemens ACS-64 locomotives is critical for SEPTA to expand capacity and meet the needs of our riders.”

The ACS-64 electric locomotive is equipped with a Fast Brake New York Air Brake System and electronically controlled pneumatic brake system that is suited for push-pull operation without turning. With a wide-body, double-cab design, the locomotive also features an integrated Crash Energy Management System, is equipped with regenerative braking and an onboard Advanced Civil Speed Enforcement System control unit including train radio, automatic train control and positive train control. The engineers cab and amenities on the ACS-64 have been designed with the assistance of the Brotherhood of Engineers Cab Committee.

“This locomotive is not only powerful, but also efficient and reliable” said Michael Cahill, president of Siemens Rolling Stock in the U.S. “We are proud that these locomotives got here on time and in great working condition, and we are excited to work with SEPTA to improve availability so more Philadelphians can get to their destinations safely and on time.” 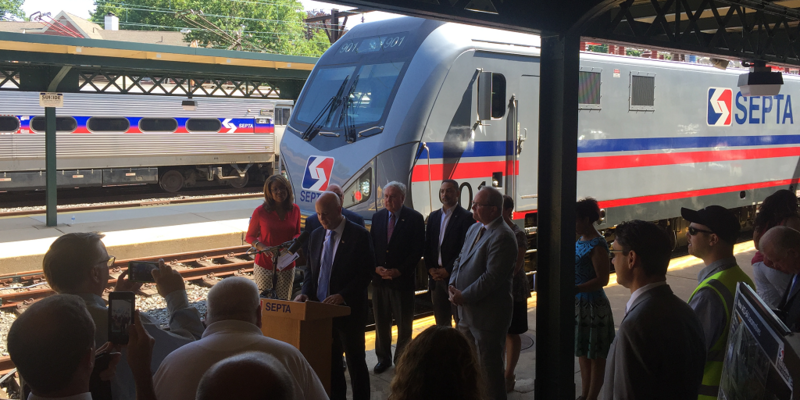 “These locomotives are exactly the type of transportation investment we envisioned when we passed Act 89,” said State Sen. John C. Rafferty Jr., Chairman of the Senate Transportation Committee. “This landmark legislation is not only improving transportation throughout the Commonwealth, but it is having an economic impact. I am very happy to see that nearly a dozen companies throughout the state were involved in the process of manufacturing these locomotives.”

Nearly a dozen Pennsylvania companies were involved in the manufacturing of these locomotives. In Philadelphia, Ben-Tech provided the handrails and couplers came from York based Voith Turbo. The Miller Welding and Machine Company in Jefferson County provided fabricated metal components. O-R-X Railway Corporation in Blair County performed the wheel-set pressing.

The ACS-64 electric locomotive has a proven service record with over 24 million track miles in revenue service with existing customers. Similar locomotives operating on the Northeast Corridor have brought enhanced transportation benefits to riders, reducing delay incidents by 25 percent and reducing delay times by 30 percent. In conjunction with the planned purchase of new multi-level passenger cars, SEPTA will be able to provide additional capacity to accommodate its growing ridership. For more information about SEPTA’s Regional Rail Service Improvement Program, visit: http://www.septa.org/service/rail/improvement/index.html. Riders can also contact SEPTA Customer Service representatives at (215) 580-7800.

To read about the locomotive's trip from Sacramento to Philadelphia, click here.