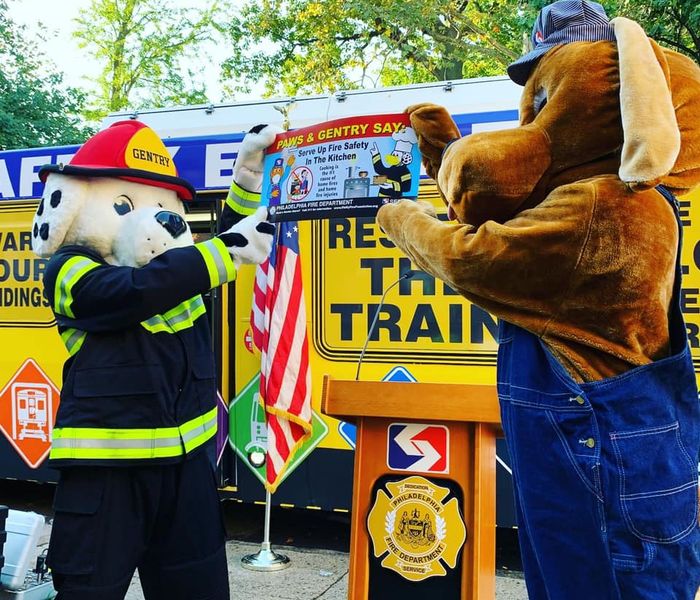 For the 21st consecutive year, SEPTA and the Philadelphia Fire Department are observing Fire Prevention Week (October 4-10, 2020) by placing informational car cards in 2,000 SEPTA vehicles. This year, the cards will promote fire safety in the kitchen, as cooking is the number one cause of home fires and home fire injuries. Everyone loves a home-cooked meal. But whether you are whipping up a grilled cheese sandwich or a gourmet goulash, every home chef needs to pay careful attention: Unattended cooking is the leading cause of kitchen fires.

In fact, cooking is the most common cause of home fires and home fire injuries in the U.S., according to the National Fire Protection Association.

That’s why the theme for Fire Prevention Week is “Serve up fire safety in the kitchen!” This year’s observance runs from Sunday, October 4 through Saturday, October 10.

Cooking safely is more important than ever. With restaurants not operating at full capacity due to COVID-19 restrictions, people are preparing more food at home.

What can you do to cook safely?

“Serve up fire safety in the kitchen” was also the theme of the 58th annual Fire Prevention Drama Contest, which is co-sponsored by the Philadelphia Fire Department and Parks & Recreation Department.

In this competition between recreation centers across the city, summer campers created and performed skits that illustrate fire safety messages. You can watch some of their skits on this YouTube playlist.

Fire Prevention Week is pegged to the anniversary of the Great Chicago Fire, which broke out on Oct. 8, 1871, killing about 300 people, leaving 100,000 homeless, and destroying more than 17,000 buildings.

Fire Prevention Week is the longest-running public health observance in the nation, having first been declared by President Calvin Coolidge in 1925.

Learn more about protecting your home and loved ones!