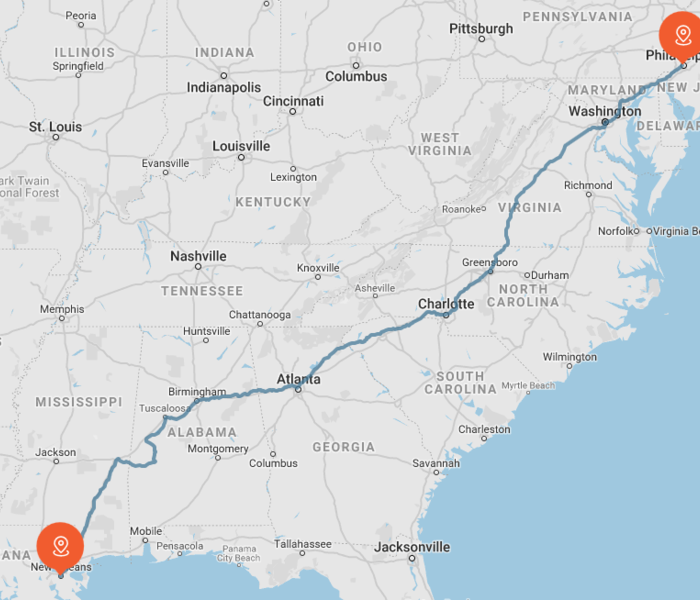 Our Birds - in true bird fashion - are headed south to New Orleans to the Mercedes-Benz Superdome to battle the New Orleans Saints on Sunday, January 13, 2019 in the next round of the playoffs! If you are lucky enough to be making the trip to cheer on the Philadelphia Eagles, here's some info on the best ways to get there via public transportation.

Public transportation from Louis Armstrong International Airport to downtown New Orleans is now easier than ever. The Jefferson Transit Authority (JET) and the Regional Transportation Authority (RTA) provide nine (9) daily departures to downtown New Orleans. Both utilize the bus stop located on the outer lanes of the second floor, outside the Concourse C Lobby Information Booth.

The Airport-Downtown Express (E2) Bus operated by JET is $2.00. The fare boxes will accept $1, $5, $10, $20 dollar bills and all U.S. coins. The Airport-Downtown Express (E2) provides service from the Louis Armstrong New Orleans International Airport in Kenner, down Airline Drive into New Orleans, which takes approximately fifty (50) minutes. For more information on public transit in the area, visit the Jefferson Transit website at www.jeffersontransit.org.

The Regional Transit Authority (RTA) provides the Airport Express (202) Bus with service to and from the Airport into New Orleans. Pick up locations for the Airport Express (202) Bus in New Orleans can be found at Elk Place at Cleveland and the Union Passenger Terminal Bus Bay 2 with transport to the Departures Level at the Airport Terminal and select trips to the new terminal construction site. The fare for this route is $1.50. For bus schedule information, pick up locations, and route information, please click here.

You can also get there via Amtrak. Their Crescent service runs from Philadelphia to New Orleans with stops in Washington DC, Charlotte, and Atlanta.

Once you're in downtown New Orleans, RTA services are $1.25, including bus transportation and the streetcar. Thirty-three bus and streetcar lines are run daily. Bus service allows transportation throughout the city's major corridor, extending from the Faubourg Marigny to Riverbend.

Speaking of the Superdome... The Mercedes-Benz Superdome, often referred to simply as the Superdome, is located in the Central Business District of New Orleans. It primarily serves as the home venue for the New Orleans Saints. Because of the building's size and location in one of the major tourist destinations of the US, the Superdome routinely hosts major sporting events, including the Super Bowl, college football championship games, and the Final Four in college basketball. The Superdome has a listed football seating capacity of 76,468 (expanded) or 73,208 (not expanded).

The Superdome has developed a reputation for having a very strong home field advantage. While all domed stadiums possess this quality to some degree, the Superdome is known to get extremely loud during games, especially during offensive drives by the visiting team. During a pregame interview before the Minnesota Vikings' opening game of the 2010 NFL season against the Saints, Brett Favre, reflecting on the Vikings' loss to the Saints in the 2009–10 NFC Championship Game, said of the Superdome: "That was, by far, the most hostile environment I've ever been in. You couldn't hear anything."

We expect to hear you cheering (and singing) loud and clear on TV!! Have a beignet for us! And don't forget - if you're flying back - it goes plane, then train! Our Airport Line can get you from PHL to Center City in 25 minutes for just $6.75!