Put The Brakes On Human Trafficking 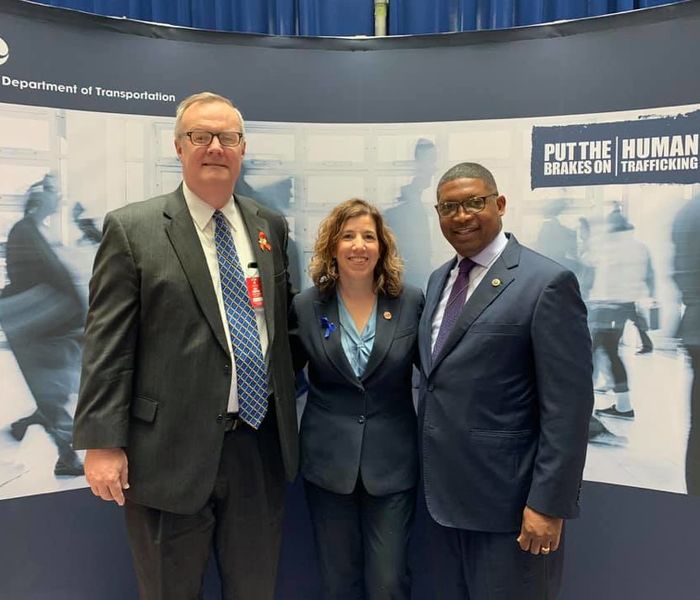 According to the International Labor Organization, there are approximately 40 million human trafficking victims worldwide. Through a variety of tactics including violence and threats, traffickers force their victims into forced labor or commercial sex against their wishes. While it seems victims would be the poor, weak or a minority, every gender, race, religion and social-economic background can be impacted by human trafficking. As a result, the issue belongs to every community in the country. For more information on the DOT program, visit https://www.transportation.gov/TLAHT.

It's unfortunate that perpetrators of human trafficking prey on vulnerable individuals – especially women and children – often exploiting the accessibility and openness of our nation’s transportation network. That transportation network – supported by thousands of law enforcement officers, tens of thousands of trained employees, and tens of millions of engaged customers every day – is also one of the strongest tools available to combat human trafficking. Considering the number of people passing through stations and traveling on buses, trains and trolleys at all hours of the day, public transportation can, and has, played an important role in stopping human trafficking.

This training has provided officers not only new investigative techniques but also new perspectives from which to determine if people they are encountering on the system are a victim of human trafficking.

These efforts are paying off.

In 2017, a SEPTA Transit Police investigation found a woman was being trafficked in the Kensington section of the City and the investigation was referred to the Department of Homeland Security.

In 2018, SEPTA Transit police came in contact with a woman who was riding on the Market-Frankford Line. She was of diminished capacity and told officers that she lived in a motel with a man who she only knew as “Black Bird.” She was transported to Philadelphia’s Special Victims Unit and a human trafficking case was initiated.

SEPTA Transit Police are also partnering with the Villanova Law Institute to Address Commercial Sexual Exploitation on an anti-trafficking grant focused on the Kensington and Frankford sections of the system.

In addition to the special training that our Transit Police participate in, SEPTA produced a human trafficking awareness training video to train employees on what to look for and how to respond if they suspect an incidence of human trafficking at our transportation hubs, on our vehicles or in the neighborhoods around our stations.

SEPTA employees and customers are really the eyes and ears of the system. We continually ask you to be aware of your surroundings for a host of different reasons – if you “See Something. Say Something.”

In combating human trafficking, a large part of our focus is on equipping SEPTA employees and customers with the training and tools to know what to look for and how to respond.

Our frontline employees, who have the most contact with our customers on a daily basis really play a critical role. In 2018, a SEPTA Bus Operator stopped the attempted abduction of a 14-year-old girl from a bus stop, after being alerted by a classmate that a man was preventing the girl from boarding the bus. And in 2018, human trafficking was added as a report category to the SEPTA Transit Watch app that enables SEPTA customers to discreetly report security and safety issues to SEPTA Transit Police.

Stopping human trafficking, and bringing those who are responsible for it to justice, is a collective responsibility that extends beyond the transportation network, and recent legislation has provided new tools for law enforcement and transit agencies to expand education and outreach. Federal legislation like the “Combating Human Trafficking in Commercial Vehicles Act” highlighted the challenges and provided structure to the various DOT efforts to combat this awful crime.

In Pennsylvania, Pennsylvania Act 197, required the posting of signs with the national trafficking hotline phone number at transportation facilities and other locations. And legislation recently passed by the Pennsylvania House of Representatives, as part of a package of human trafficking bills, will greatly increase penalties for those who engage in and solicit traffic victims.

One of the last pieces of legislation SEPTA Board Member and former State Senator Stewart Greenleaf he passed in 2018 was the “Safe Harbor” bill, which ensures child victims of human trafficking won’t be prosecuted for prostitution or other crimes.

Together we can Put The Brakes On Human Trafficking.