Check Out These Murals! 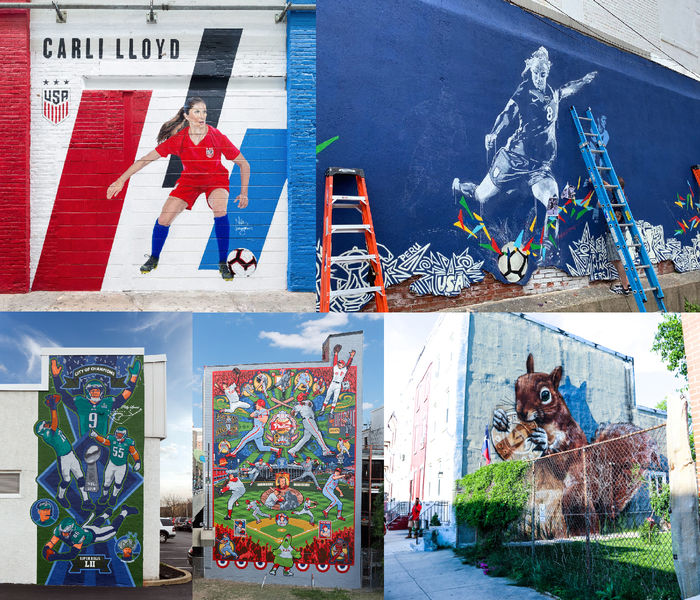 Philadelphia has frequently been labeled as the “Mural Capital of the World.” In this city, every wall is a potential canvas and you can spot art everywhere you go, even along the Market-Frankford Line or in Jefferson Station! Since murals around Philly are constantly popping up, we thought we'd highlight a few of our current favorites. Check them out below!

With the U.S. Women's National Team just off the heels of their World Cup victory, what better time to check out the mural of  team captain Carli Lloyd? Forward Carli Lloyd is a South Jersey native who roots for Philadelphia teams and has said this is one of her favorite cities. She loves Philadelphia so much, she even snuck a "Fly Eagles Fly" chant into her victory speech! Her mural, created by Nile Livingston in partnership with Mural Arts, is on the side of a building near Front & Girard under the El. Couldn't be easier to get there on SEPTA. Just take the Market-Frankford Line to Girard Station! Carli Lloyd isn't the only player on the USWNT to have a connection to Philadelphia! Team Midfielder Julie Ertz is married to Zach Ertz, who plays for the Philadelphia Eagles. Zach was spotted on the sideline throughout the tournament cheering on his wife. A mural of Julie Ertz has popped up on the side of Love City Brewing Company on 1023 Hamilton Street. This colorful tribute was made by muralist Bill Strobel and curator Christian Rodrguez, Get there on Bus Routes 23 or 45! Now that you've seen Julie's mural, why not pay tribute to her husband's team? Yes, of course there is a mural to celebrate the Eagles' first-ever Super Bowl win! The "City of Champions" mural can be outside Spike's Trophies along Grant Avenue in the Northeast. Artist David McShane created the mural in partnership with Mural Arts. SEPTA's Boulevard Direct bus can take you right there! Since we're focusing on champions, we have to mention the 2008 Phillies! To celebrate the beloved team's World Series victory over a decade ago, the colorful mural was erected on 24th & Walnut, right above the Schuylkill. This mural was actually created by the same artist that made the above mural, David McShane. Bus Routes 9, 21, or 42 will drop you off right there! So technically our last mural recommendation is not a world champion like the others, but it is in our hearts! About two years ago, a mural of a squirrel munching on a SEPTA token popped up in North Philadelphia. You can't buy tokens anymore, but you can check this Philly-centric work of art. Located at 2217 North Hancock Street, get there by taking the Market-Frankford Line to York-Dauphin Station. From there, it's a 5 minute walk.