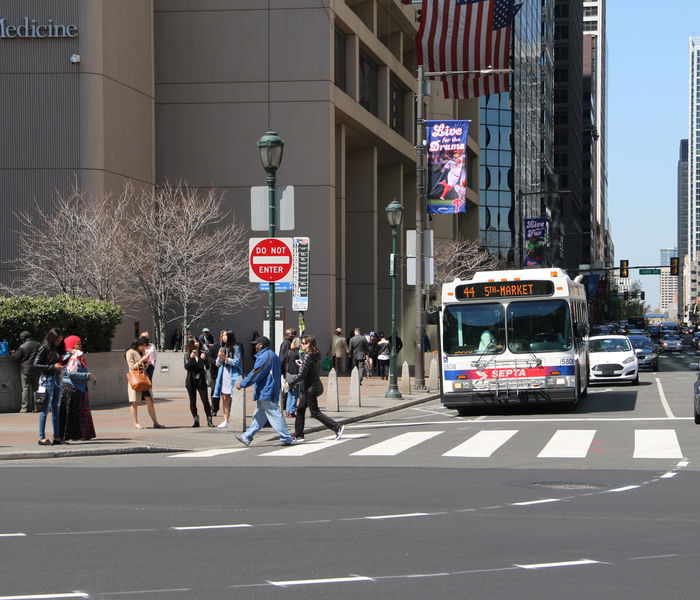 This week, we’ll be exploring the Route 44. Travelling from 5th and Market in Center City to Ardmore, this route usually carries about 3,600 people on a typical weekday. It makes about 130 trips a day and travels 13.4 miles per trip, totaling about 1,742 miles every weekday. You can catch this bus from 6a to 11:30p Monday thru Friday and 8a to 9p on Saturday and Sunday. The history of this route dates back to 1960 when it was operated by Philadelphia Transportation Company (PTC). At that point, it ran from City Hall to 54th Street & City Avenue in West Philadelphia. SEPTA didn’t take over operations until 1970. Beginning at 5th & Market, the Route 44 is a great way to get to Philadelphia landmarks like Independence Hall and the Liberty Bell, the Constitution Center, the African American Museum and more. From 5th & Market, the Route 44 travels east on Market Street, heading through Center City, connecting with Jefferson, Suburban, and 30th Street Stations. The Route 44 then travels onto the Schuylkill Expressway to West Philadelphia via City Avenue, passing Saint Joseph's University. From there, the Route 44 heads through Merion and Narberth to its final destination, Ardmore. You can hop off the Route 44 within a three minute stroll of Ardmore Music Hall, which has a number of shows and events this week! This Thursday, check out the 2nd annual AMH +Ripplewood Food Menu Debut with Live Music and Libations, or Saturday's Junior Marvin concert!

So whether you’re going to Center City, West Philly, or the suburbs, let the Route 44 get you there!