SEPTA Gets Boost for Snow Removal 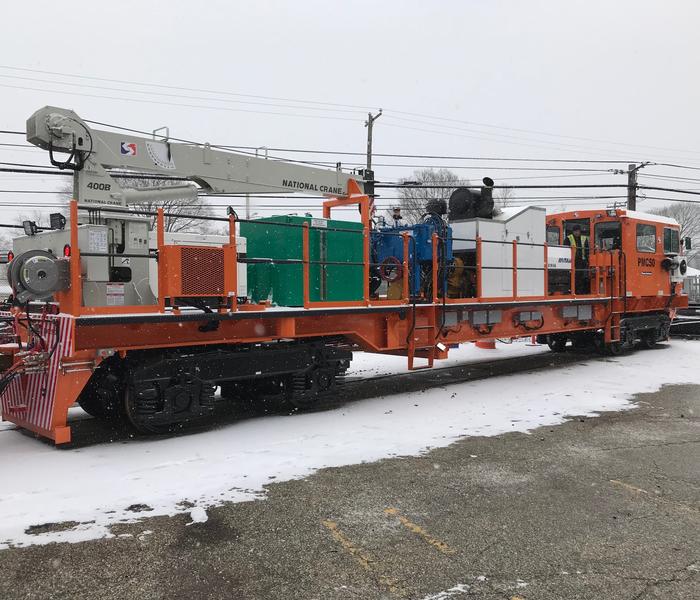 Harsh winter weather can significantly hinder public transportation service. SEPTA’s Norristown High Speed Line (NHSL) is especially susceptible to drifting snow due to the location of its tracks, which sit uncovered at higher points in Delaware and Montgomery counties. Snow accumulations of eight inches or more impede the trains and can cover the tracks and electrified third rail, affecting operations and forcing SEPTA to suspend service.

“In my 30 year career at the Authority, there have been several storms that have forced us to shut down the Norristown High Speed Line for days at a time,” said SEPTA General Manager Jeffrey D. Knueppel. “This has been a real hardship on both our customers and our crew. We’ve had a need for equipment that will remove snow quickly and efficiently so that we can resume service as soon as possible.”

To help combat the snow’s impact on NHSL service, SEPTA has acquired new tools: a Rail Maintenance Vehicle (also known as a Utility Track Vehicle or UTV) and a cab flat car. Together, the equipment will be used as a work train Prime Mover. Among the many jobs the equipment can handle is plowing snow from the tracks.

“The equipment has plows in the front and rear and is equipped with a 100 cubic-feet-per-minute (CFM) standalone air compressor that supplies air to airline reels on both ends of the vehicle that  can be used to clear switches and obstruction areas on the line,” said SEPTA Assistant General Manager of Engineering, Maintenance & Construction Bob Lund. “Compressed air will also be utilized to clear snow from the electrified third rail.”

The UTV contains a fully enclosed cab for personnel plus one operator. In addition to the plows and air compressor, the vehicle also has a crane driven by the main engine source; a hydraulic tool circuit; a stand-alone diesel powered generator set; and controls for the braking system of flatcars.

The equipment’s use is not limited to winter storms. Year-round, the Prime Mover will be used for delivering and picking up materials used for work and maintenance projects; towing rail vehicles; replacing and repairing rail and ties; and providing supply for hydraulic, pneumatic, welding and electric tools.

The UTV joins SEPTA’s complement of winter weather equipment, including high-velocity snow blowers and brining equipment. “Having all of these tools at our disposal helps us to stay on top of bad weather and keep service running or restore it quickly in case of a suspension,” said Lund.