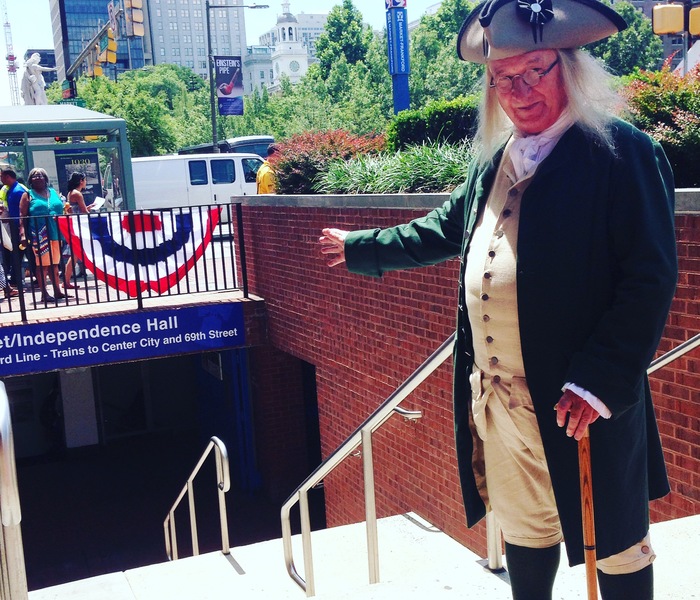 Just in time for July 4th, SEPTA has renamed the station at the doorstep of Independence National Historical Park and neighboring cultural and historical attractions.The newly minted “5th Street/Independence Hall Station” was unveiled today during a ceremony with elected officials, dignitaries and community members. The station is a main destination point on the Market-Frankford Line, serving over 3,300 riders each day. It also provides connections with bus routes 17, 33, 38, 44 and 48, the City of Philadelphia’s Indego Bike Share Program and a network of pedestrian pathways leading to and through Independence National Historical Park. “The intersection of 5th and Market Streets is the anchor for millions of visitors looking to connect with the founding of our nation,” said SEPTA Board Chairman Pasquale T. Deon Sr. “It is important that this station be clearly identifiable. We can now point to 5th Street/Independence Hall Station as the hub for travel to and from America’s birthplace.”

As part of the renaming effort, SEPTA replaced station and street-level signage. The Authority is also updating system maps to reflect the new name. Rail and bus announcements also note Independence National Historical Park as vehicles approach 5th Street/Independence Hall Station.“As trustees of the nation’s most historically significant landmarks, we are responsible for preserving our legacy and keeping it vital for future generations,” said Mayor Jim Kenney. “A renamed station that emphasizes its prominent location will help direct visitors and residents to these historical treasures.”"I applaud SEPTA for being such a collaborative partner and for re-naming this El station to include Independence Hall. The increased visibility will help enhance this major gateway to the Independence National Historical Park,” said Independence National Historical Park Superintendent Cynthia MacLeod.“This renaming is an important first step toward an overall revitalization of the 5th Street/Independence Hall Station,” SEPTA GM Knueppel said. “We have big plans for the station.”

SEPTA recently applied for a federal TIGER grant that would fund critical structural repairs at the station.The project would transform surrounding street-level pedestrian and multi-modal connections, fully upgrading the station and making it a first-class transportation hub.“On behalf of my constituents who live and work near 5th Street/Independence Hall Station, I’m grateful to SEPTA for being responsive to the needs of stakeholders,” said City Councilman Mark Squilla. “I’m looking forward to seeing SEPTA’s planned improvements become a reality.”

SEPTA is the vehicle, but the journey is yours! Get started today!