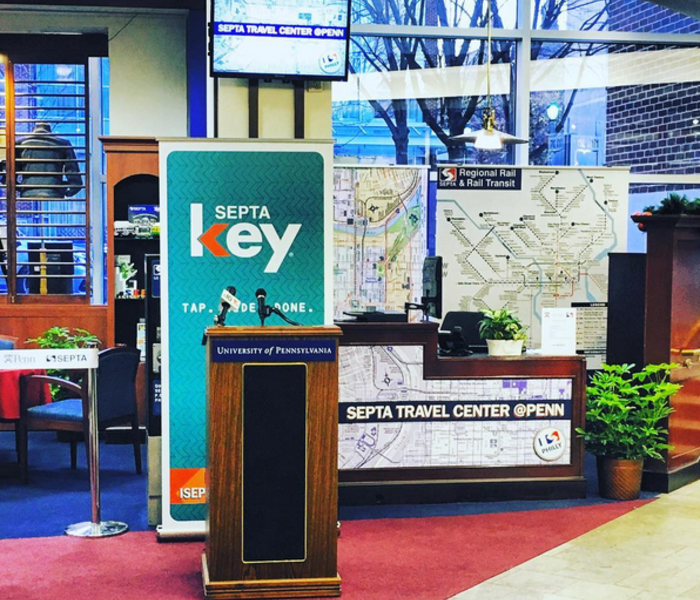 Navigating the Tri-State Region via public transit just became easier for anyone who chooses to work, study or visit University City, thanks to a unique collaboration between SEPTA and the University of Pennsylvania. Officials gathered on Wednesday, 12/7 at the Penn Bookstore for a ribbon cutting ceremony celebrating the grand opening of the new SEPTA Travel Center @Penn.

Located in the heart of University City on the first floor of the Penn Bookstore at 36th and Walnut Streets, the travel center is the first of its kind. The center will be staffed by temporary SEPTA employees, known as “travel consultants” with support from customer development staff, Mondays through Fridays from 11am until 6pm. In addition to providing information on SEPTA, the Center will offer assistance with all forms of travel in and around Penn’s campus and the City, including the University’s transit service (Penn Transit), LUCY®, New Jersey Transit, Amtrak, Indego Bike Share and car sharing.

Here are a few quotes from the ribbon-cutting ceremony:

“Penn's compact urban campus is well served by an extensive network of subway, bus, regional rail, and trolley lines that are located around the campus where public transit stops are never more than a five-minute walk from any part of campus,” said Marie Witt, Vice President of Penn’s Division of Business Services. “This collaboration with SEPTA will support both members of the Penn Community as well as residents and visitors to University City to better understand and utilize the array of transit resources available to them.”

“Part of what attracts faculty, students and staff to Penn is that it is located in the heart of a vibrant, urban center such as Philadelphia,” Witt added. “This new and innovative center will enable us to better connect our community to other neighborhoods and support Penn’s goal of providing and supporting integrated transit solutions.”

“Philadelphia is such a great region for ‘eds and meds,’” said SEPTA General Manager Jeff Knueppel. “This Travel Center reflects SEPTA’s commitment to better connect our transit system with its robust and growing student population. It is such an exciting time for SEPTA, with the ongoing transition to SEPTA Key, and for Philadelphia, with cranes dotting the skyline and college campuses. With the Travel Center as a cornerstone, we think this is a perfect time to encourage students, many of whom are newcomers to Philadelphia, to consider SEPTA as a travel option, and we are pleased to partner the concept at Penn where we expect to be a visible presence for years to come.”

The Center is one of several initiatives SEPTA and Penn have been discussing in recent months. SEPTA collaborated with its Youth Advisory Council (YAC), in which Penn students are active members. YAC members advocate for student needs within Philadelphia’s 5-county region and recently administered a “College Student Usage Survey.” The goal of the survey was to better understand existing college and university student transit use in the Philadelphia region. Over 3,000 responses were received and survey data revealed that 6.7 percent (36,500) of SEPTA’s average weekday riders are college or university students.