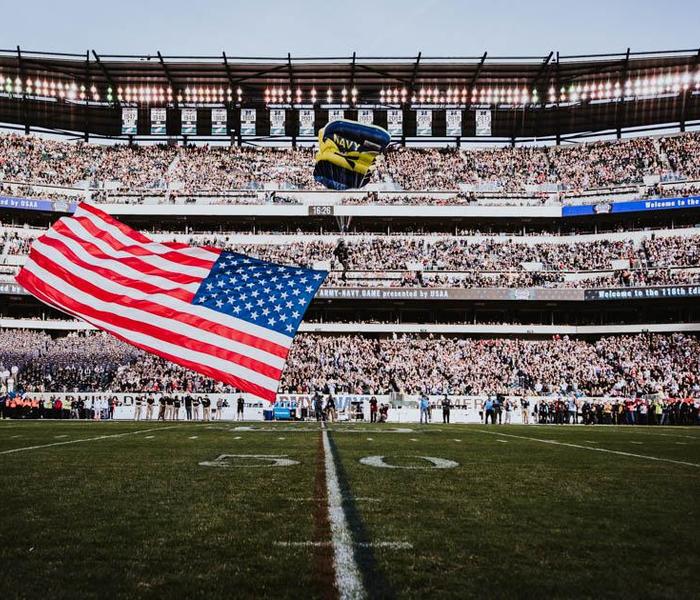 The Army-Navy Game is back at Lincoln Financial Field this Saturday, 12/9 and we could not be more excited because when Army and Navy meet, there is no other game with deeper foundations or greater prestige! 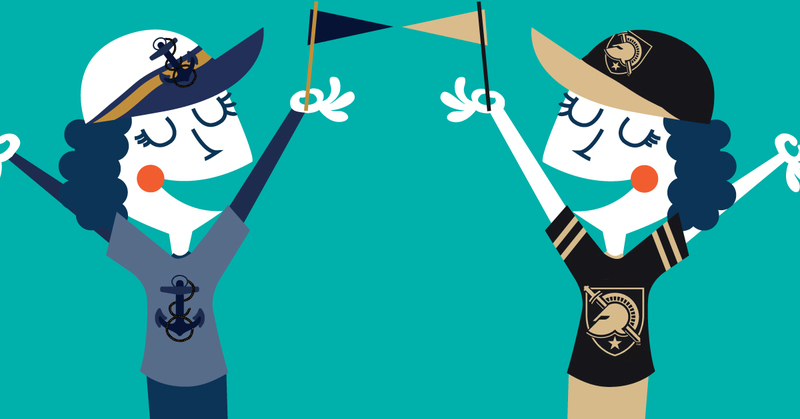 The rivalry kicked off 125 years ago when Cadet Dennis Mahan Michie accepted a “challenge” from the Naval Academy and the two squads faced off on The Plain at West Point on November 29, 1890. Navy had been playing organized football since 1879, and came out on top of the newly-established Army squad. Ever since, through those many years of intense cheers, unforgettable plays and climactic moments, the Army-Navy rivalry has been etched into the minds of countless fans and followers. All it takes is a visit to West Point or Annapolis, where everything (from the finely manicured hedges to the chant following grace-before-meals) proclaims “Beat Navy” or “Beat Army,” to understand how deeply ingrained this rivalry actually is. In 1899, Philadelphia was chosen as a neutral locale to host the Army-Navy Game and begin the rivalry anew. Franklin Field was the site of this game, and through the 20th and now 21st century, Municipal Stadium (later JFK Stadium), Veterans Stadium and Lincoln Financial Field have all staged Army-Navy in Philadelphia. As the rivalry has moved into the new millennium, Philadelphia has continued to be the primary host of the storied series and the home of the game.

If you’re heading down to the game, we suggest you leave the car at home and leave the driving to SEPTA. This also goes for cabs and rideshares. Because the best way there (and back again) is the Broad Street Line. SEPTA's Broad Street Line drops you steps from Lincoln Financial Field. Hop it south to AT&T Station (last stop). Trains run every 8 to 10 minutes. It takes about 11 minutes to travel from City Hall to AT&T Station on a local train. For the Army-Navy Game, we will have 10 Express Trains leaving from Fern Rock every 10 minutes from 9:05a until 12:45p. See below for Express Train stops. 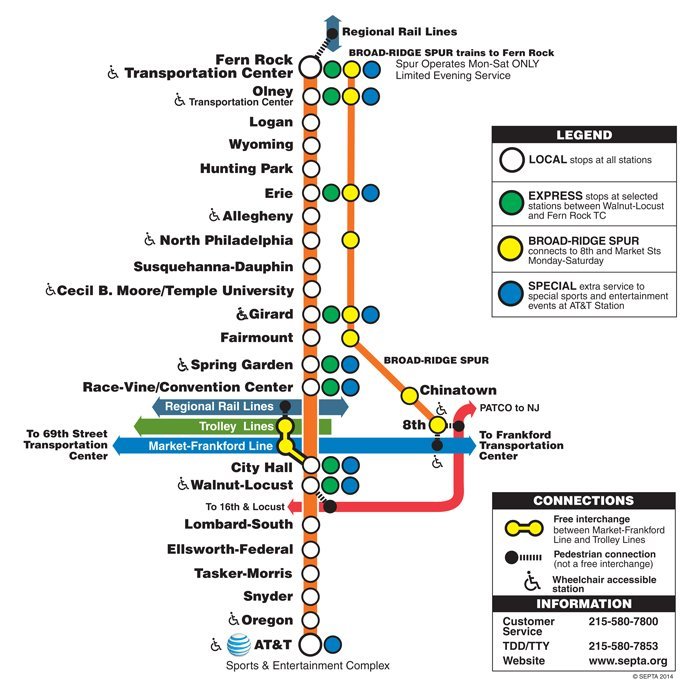 Plus immediately following the end of the game, fans will find northbound trains waiting to provide local and express service back towards Center City and Fern Rock Transportation Center. You'll be the first one to McGillin's!

Not only will you avoid traffic on Broad Street, I95, the Schuylkill Expressway, etc. you will literally save money! We hear parking could be as much as $45 for cars and $85 for over-sized vehicles! One way fare on the Broad Street Line is $2.50 cash. You must have exact change if paying the cashier. The cashier cannot make change. But our Fare Kiosks located in every Broad Street Line Station can. You can purchase a Quick Trip to get you to and from the game. Each Quick Trip costs $2.50. Fare Kiosks accept cash, credit and debit. All Quick Trip tickets must be used on the date of purchase. They are not reloadable or reusable.

Your best bet, is a SEPTA Key Card. Available from SEPTA Sales Offices or from Fare Kiosks located in all Broad Street and Market-Frankford Line Stations. The SEPTA Key Travel Wallet allows you to pay as you go and you'll receive a discount for each ride ($2 versus the $2.50 cash fare). It's just like using a token without all that heavy metal in your pocket or purse, and it's certainly much better than paying with cash. You must load a minimum of $10 [which will get you 5 rides to use any time you want]. You can use cash, credit, debit or tokens [$2 value each] to add funds to your Travel Wallet. Plus it's reloadable and reusable. In fact - if you load $10, you'll be ready for next year's game!

You can register your SEPTA Key at https://www.septakey.org/ this way if you lose it, you don't lose the value on the card. Please note, funds in your Travel Wallet can only be used to pay for one (1) person. It cannot be tapped multiple times to pay for anyone traveling with you.

You can even your flash your SEPTA Pass or SEPTA Key for more than just a ride. With Perks, score discounts at a number of local businesses by flashing your valid TransPass, TrailPass, One Day Independence Pass, or SEPTA Key. McFadden’s Ballpark Restaurant & Saloon offers 15% off your total bill and is just down the road from Lincoln Financial Field.