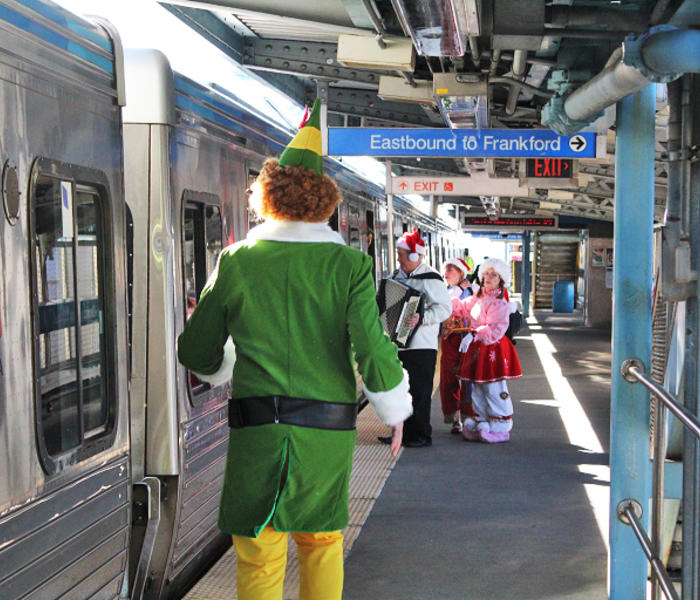 In December, we invited ISEPTAPHILLYers to submit a caption the above SEPTA photo we thought deserved one. We received many entries - all of which captured the North Pole-meets-SEPTA fun of the photo. But - there can only be one winner and that winning caption came from Rita:

Have you seen the SEPTA route map? It’s GINORMOUS!!

Here are a few more of our favorites...

Ryan: You can’t spell Buddy the Elf without “the El.”

Bryce: When Santa makes you catch the El to work.

Syreeta: El-f on the Frankford Shelf

Dan: Does anyone know if this stops at Santa's Workshop?

Maria: Son of a Nutcracker! How do I get to the Candy Cane Forest from here?

Joe: Guys! Guys! Don't get on! This isn't the train to the North Pole!

Grant: I passed through the seven levels of the Candy Cane forest, through the sea of swirly-twirly gum drops, and then I realized the El would’ve been faster!

Ella: When Santa forgets the keys to the sleigh.

Dominique: The best way to spread Christmas cheer, is singing loud for all Septa riders to hear.

Michele: Hey have you seen the decorated buses....they are fantastic.

Colleen: Son of a Nutcracker! Are we going to the twirly wurly forest?

Jeffrey: Frankford? I thought this train went to the North Pole!

Geoffrey: When Santa makes you take the L from Berks Station to the Holiday Bazaar because he doesn't want to pay for parking in Center City

Matthew: I passed through the seven levels of the Candy Cane forest, through the sea of swirly-twirly gum drops, and then I got on the MFL!

Thomas: I REALLY NEED AN APARTMENT CLOSER TO WORK!

Dana: Let's Go...Let's Go all up and down the Tracks we go, through City Hall even out West, make way for Santa Express

Michelle: The Elf is riding SEPTA to the North Pole to spread the Christmas cheer, to see who has been naughty or nice this year!!

Teresa: I was watching Carson, Nick and their teammates in the parade and the next thing I know is it’s Christmas and I’m wearing this outfit.

Grant: Oh boy Santa is going to be so mad I got the sleigh towed!  Thankfully SEPTA can get me to the impound lot!

Ancy: The Gang Gets Ready for Christmas Village

Judy: I planned out our whole day: First, we'll make snow angels for two hours, and then we'll go ice skating, and then we'll eat a whole roll of Toll-House cookie dough as fast as we can, and then to finish, we'll ride SEPTA all the way home!

Thank you to everyone who submitted these great captions! Check out our contest page for your next chance to win a prize!