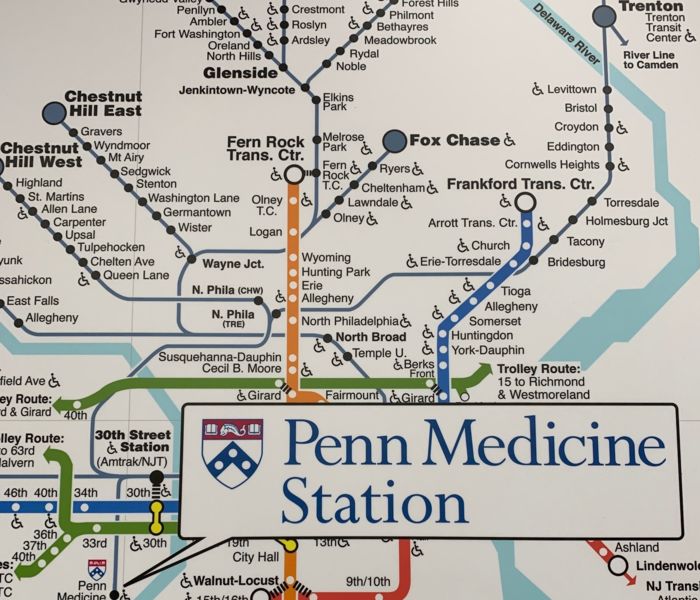 The 6,400 passengers that use the station every day will see new signage, maps and interactive screens in the coming weeks.

As with SEPTA’s other naming rights agreements, this partnership will further SEPTA’s commitment to generating new sources of revenue.

“This agreement with Penn Medicine will deliver major benefits to our customers and other taxpayers who help fund the Authority's operations,” said SEPTA Board Chairman Pasquale T. Deon Sr. “The revenue this generates will go directly toward the everyday costs of running the transit system.”

The station updates and renaming will arrive just in time for the home stretch of construction on Penn Medicine’s newest hospital, the Pavilion. The facility, which will house inpatient care for the Abramson Cancer Center, heart and vascular medicine and surgery, neurology and neurosurgery, and a new emergency department, is expected to be completed in 2021. It’s the largest capital project in Penn’s history and Philadelphia’s most sophisticated and ambitious health care building project.

“As the gateway to the Pavilion and our West Philadelphia medical campus, thousands of people each day pass through this SEPTA station en route to work, visit, and receive care in our facilities, and we’re so thrilled for the opportunity for the station to bear the Penn Medicine name,” said Kevin Mahoney, CEO of the University of Pennsylvania Health System. “We are proud to partner with SEPTA to enhance the rider experience for our public transit system, which is a crucial part of what keeps our great city running each day.”

This partnership is consistent with SEPTA's mandate to seek alternative sources of revenue. Act 44, a measure passed by state lawmakers in 2007 to provide funding for transportation in Pennsylvania, called on SEPTA and other transit agencies to bolster efforts to generate non-fare box revenues.

“This partnership is a win-win for SEPTA customers,” Richards said. “SEPTA has worked hard to find innovative ways to enhance service while controlling costs, and we will continue to aggressively pursue more opportunities moving forward.”

Penn Medicine is one of the world’s leading academic medical centers, dedicated to the related missions of medical education, biomedical research, and excellence in patient care. Penn Medicine consists of the Raymond and Ruth Perelman School of Medicine at the University of Pennsylvania (founded in 1765 as the nation’s first medical school) and the University of Pennsylvania Health System, which together form a $7.8 billion enterprise.

The Perelman School of Medicine has been ranked among the top medical schools in the United States for more than 20 years, according to U.S. News & World Report's survey of research-oriented medical schools. The School is consistently among the nation's top recipients of funding from the National Institutes of Health, with $425 million awarded in the 2018 fiscal year.The University of Pennsylvania Health System’s patient care facilities include: the Hospital of the University of Pennsylvania and Penn Presbyterian Medical Center—which are recognized as one of the nation’s top “Honor Roll” hospitals by U.S. News & World Report—Chester County Hospital; Lancaster General Health; Penn Medicine Princeton Health; and Pennsylvania Hospital, the nation’s first hospital, founded in 1751. Additional facilities and enterprises include Good Shepherd Penn Partners, Penn Home Care and Hospice Services, Lancaster Behavioral Health Hospital, and Princeton House Behavioral Health, among others.

Penn Medicine is powered by a talented and dedicated workforce of more than 40,000 people. The organization also has alliances with top community health systems across both Southeastern Pennsylvania and Southern New Jersey, creating more options for patients no matter where they live.Penn Medicine is committed to improving lives and health through a variety of community-based programs and activities. In fiscal year 2018, Penn Medicine provided more than $525 million to benefit our community.