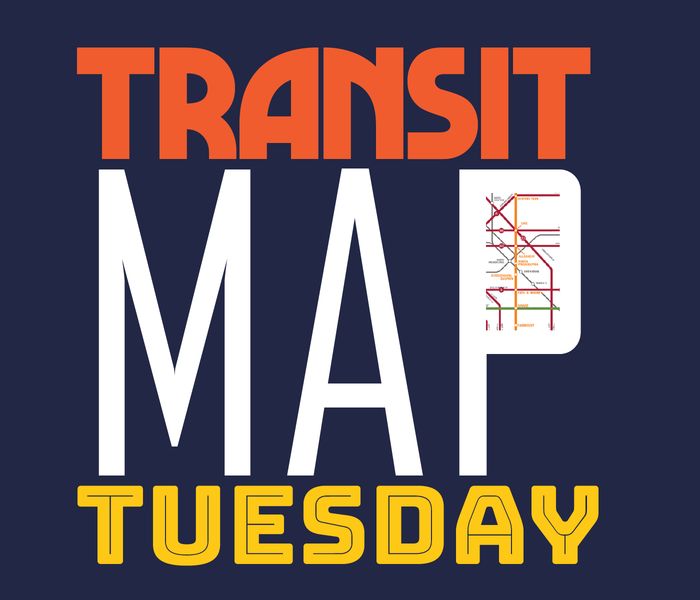 Did you know that SEPTA is redesigning its rail transit wayfinding system to make it easier to navigate for all types of users?

Everything’s on the table - including maps.

And what better way to start brainstorming than looking at some of the world’s best transit map styles through a SEPTA lens.

Over the next few weeks we’ll be posting fantasy versions of the SEPTA transit map inspired by our peers.

Welcome to #TransitMapTuesday! Every Tuesday - beginning Tuesday, September 15, 2020 - we update this blog with the latest iteration of the map.

Stockholm's public transit provider, SL, numbers all of its routes - be they local bus, enhanced bus (like SEPTA's Boulevard Direct Bus), surface trolley, subway, suburban light rail, commuter rail, or ferry. The actual number tells you not only where the line goes but what type of service it is: single digits are downtown trolleys and enhanced buses; the teens are subways; the 80s are ferries; etc.

Until 2015, rail services were given letter prefixes to differentiate them from buses and ferries but that's not as common anymore. Nowadays, rail lines have secondary names based on color and geography: the SL's seven (7) subways are grouped into the Red, Green, and Blue Lines and the SL's eight (8) suburban light rail lines are grouped into five named railways (e.g. Roslagsbanan or Nockebybanan). This numbering system allows all SL services to feel like a cohesive family while maintaining a clear identity for each mode.

Imagine if SEPTA used numbers like this to help passengers navigate its complex network: The Norristown High Speed Line would be able to retain its name but nobody would have to say it anymore! 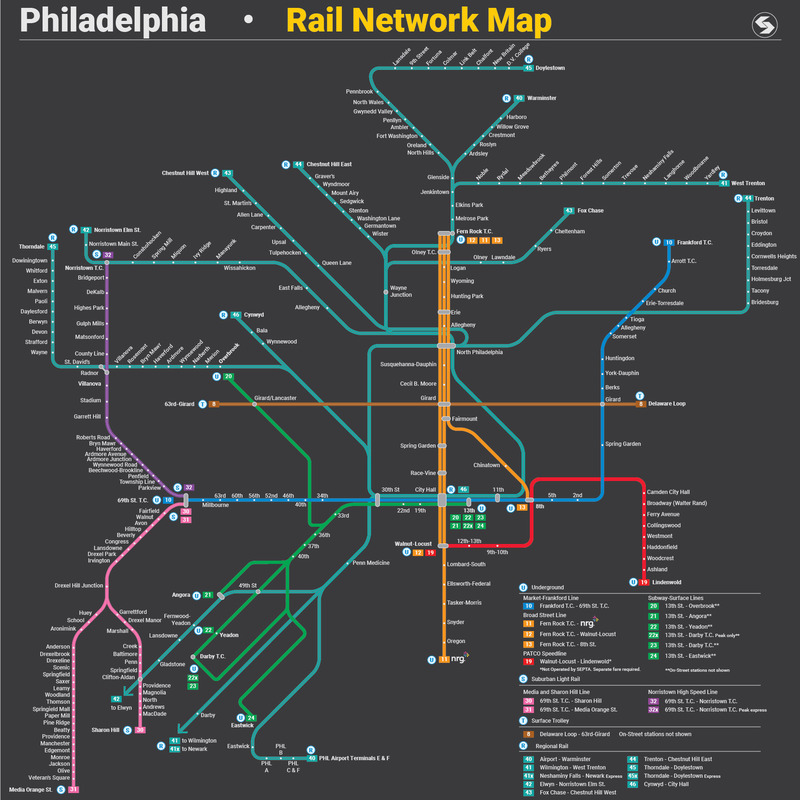 The maps that have been shared through #TransitMapTuesday were made over the summer as part of an applied study of how transit agencies around the world name and display their rail transit services. Stockholm was the first city we studied and we thought it appropriate to close this part of the series with the one that started it all!

Stay tuned next week for an opportunity to vote on the map you liked the most and for updates on the future of #TransitMapTuesday and our ongoing Wayfinding Project.

Most rapid transit lines have one name per line - whether that line is a specific service pattern like the Route 10 Trolley which always goes from Center City to Overbrook - or a family of services - like the Broad Street Line which carries a combination of local and express services from Fern Rock or Olney to NRG, Walnut-Locust, or 8th Street.

Singapore uses a tiered system that names line families and then numbers (for Mass Rapid Transit) or letters (for Light Rapid Transit) the individual services. Even further - each direction gets its own letter or number. So - on SEPTA - the Broad Express Line would carry the 5 train to Walnut-Locust, 6 train to Fern Rock, and the 7 train to 8th and Market. This system allows SEPTA to retain the history of the names of its rapid transit lines, while giving passengers an easy way of finding their way to the right train: Instead of "take a 69th-Street-bound Market-Frankford Line train to 52nd Street," it's "take the 1 to stop MK 23, 52nd Street".

This map focuses on SEPTA's Mass Rapid Transit. The Light Rapid Transit (PATCO, Trolleys, and the Norristown High Speed Line) and Regional Rapid Transit systems would each get their own, more detailed maps. Would you find it easier to get around if each direction was labeled differently? 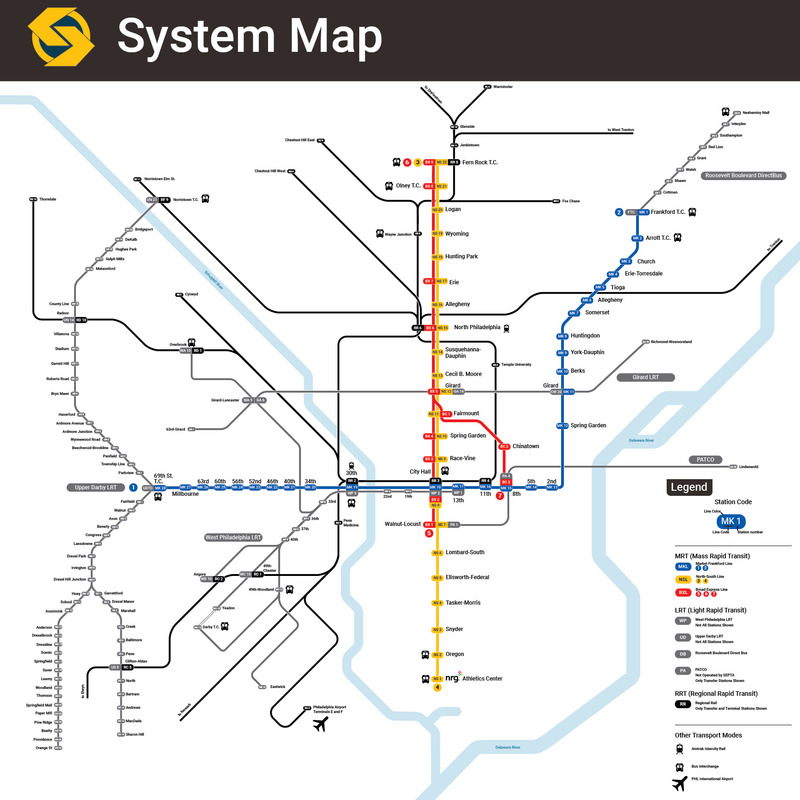 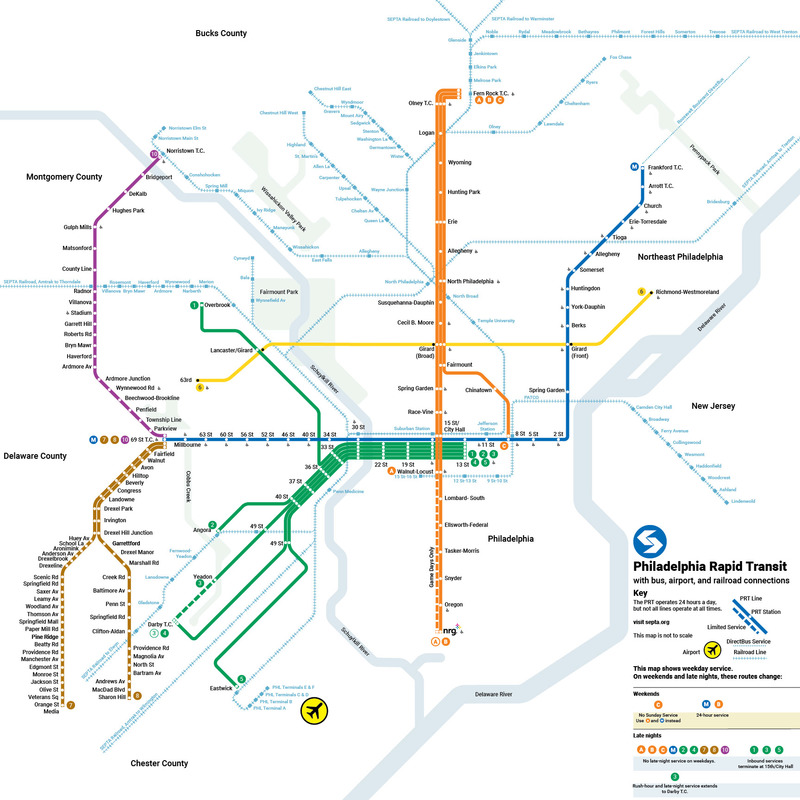 Instead of focusing on a single city, Week 7's [Tuesday, October 27, 2020] map combines elements from the U-Bahn maps of the German cities of Berlin, Köln, and Stuttgart (except the airplane, which comes from Baltimore). Notice the use of colors and numbers to show how lines are related to each other. 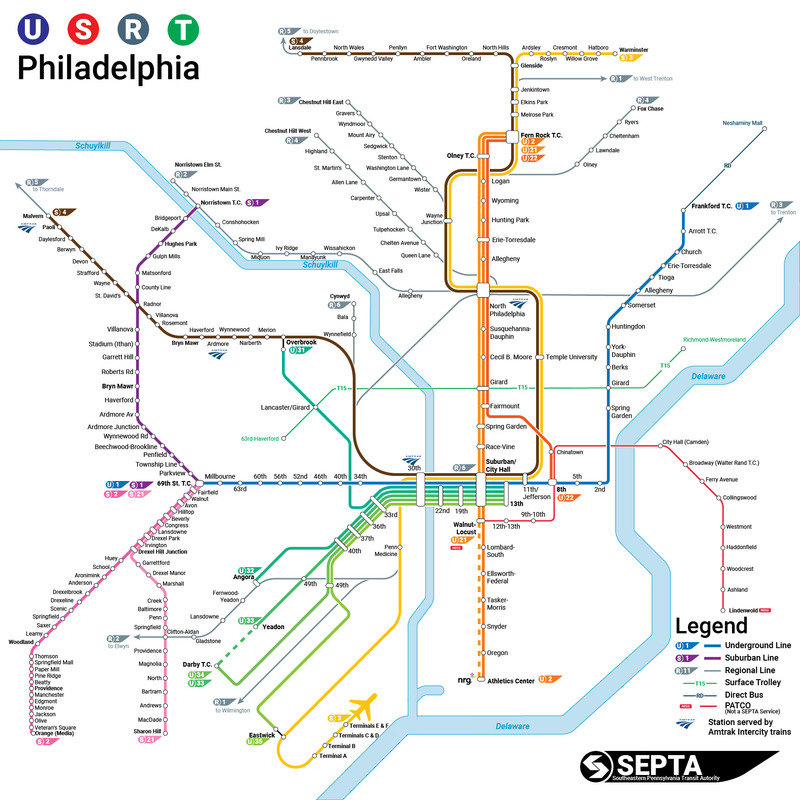 For Week 6 [Tuesday, October 20, 2020] we head to Japan. Similar to Seoul, Tokyo numbers its stations, but it also uses a combination of letters, numbers, and colors to show different services. This method can be helpful for people who don’t speak Japanese. Would this help you while visiting Tokyo? 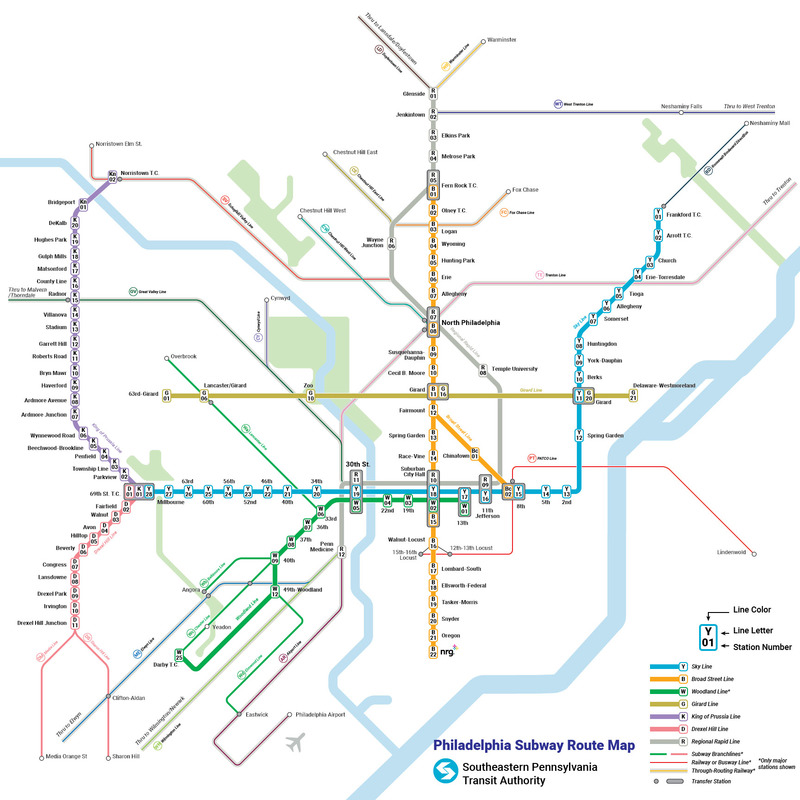 For Week 5's [Tuesday, October 13, 2020] #TransitMapTuesday, we're going out to sunny Los Angeles! The Los Angeles County Metropolitan Transportation Authority used to label rail lines by color, but now uses letters instead. Each individual service pattern has its own color and letter. 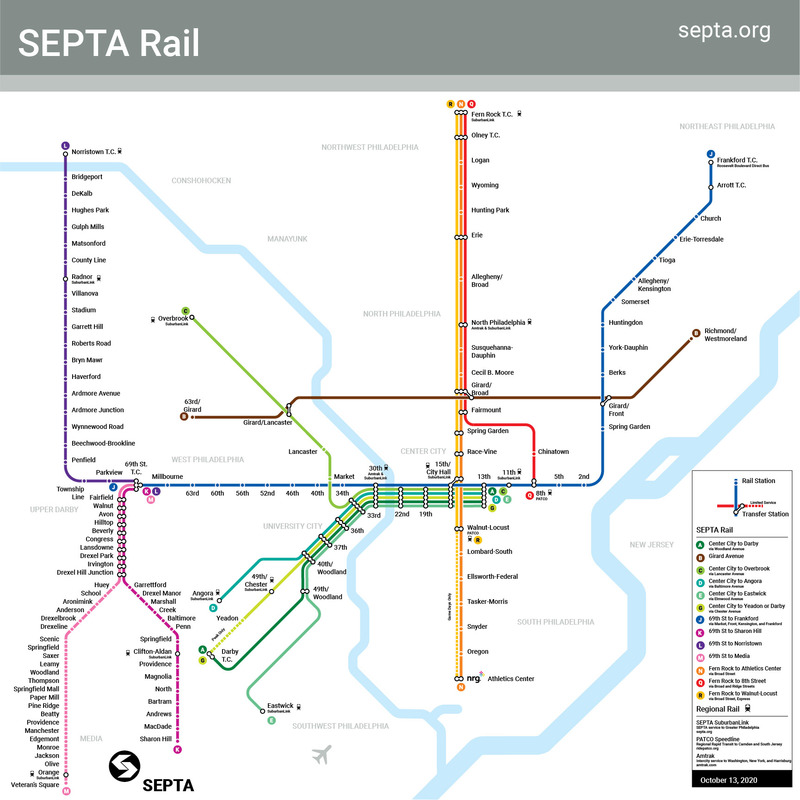 Behind the scenes, this map was made in Adobe Illustrator using short line segments (with the Pen Tool, snapped to the grid) to put together the lines. Parallel curves were made out of concentric circles cut with the Scissors Tool at the intersects with a diagonal line. For Week 4's [Tuesday, October 6, 2020] #TransitMapTuesday, we have SEPTA à la Parisenne. What do you think about Paris’s Réseau Express Régional (RER)? 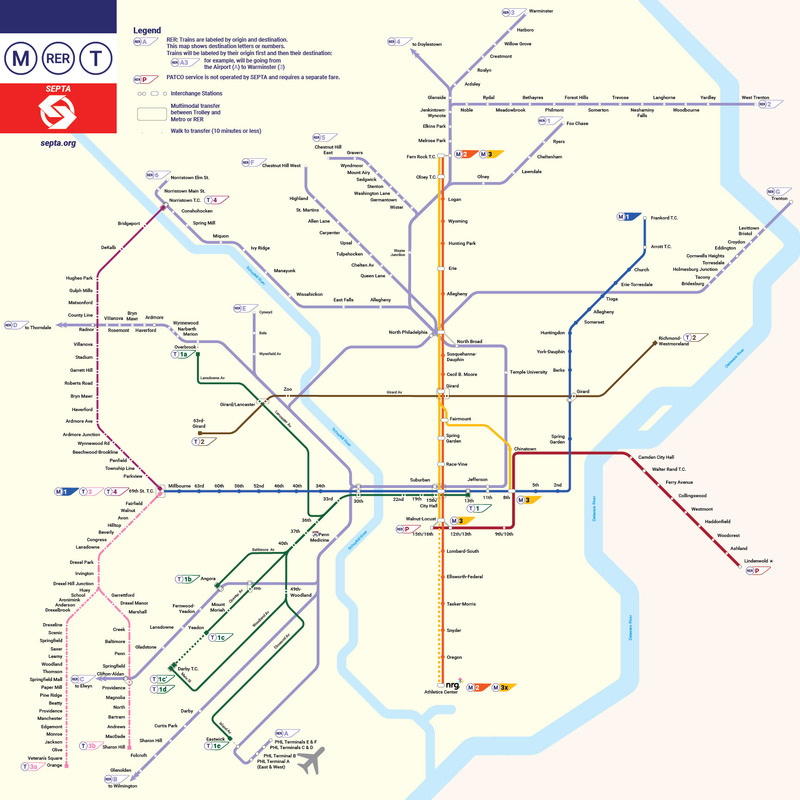 Week 3's [Tuesday, September 29, 2020] SEPTA rail map is inspired by the Seoul Metropolitan Subway! This map makes widespread use of numbers for both train lines and stations – do you think that makes navigation easier or harder? 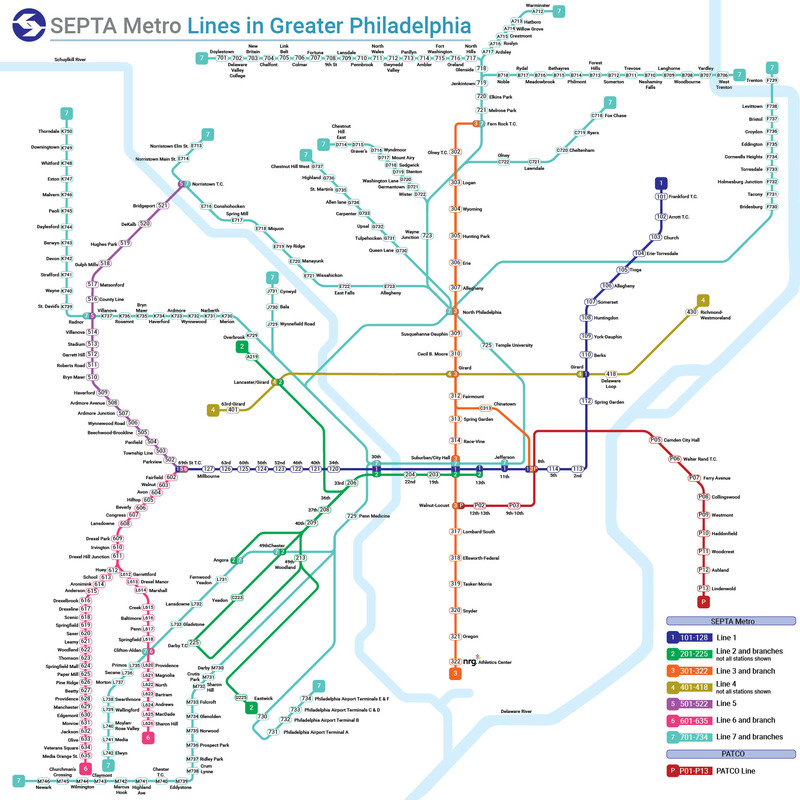 Week 2's [Tuesday, September 22, 2020] SEPTA map is inspired by Boston! This map shows the “Jumbo Blue Line” – the Market Frankford Line plus feeders, inspired by the MBTA Red Line/Mattapan Trolley. Also, notice SEPTA’s frequent bus lines in red. This map shows all of SEPTA’s transit lines that meet the 15/15/5 frequency standard. Bravo to Strategic Planning’s intern for a thought-provoking design! What do or don’t you like about this version? Please comment below! 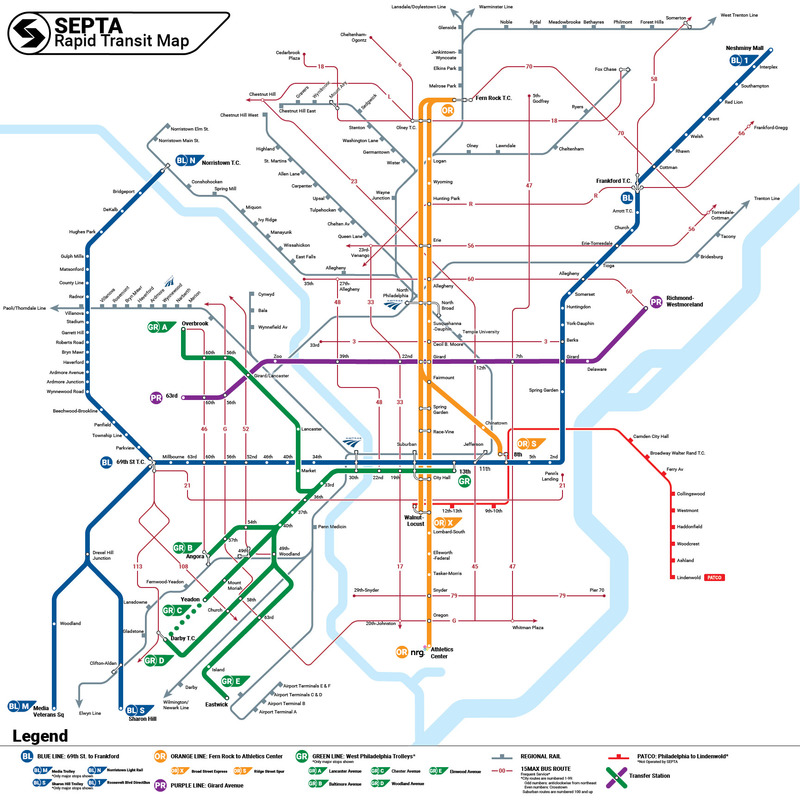 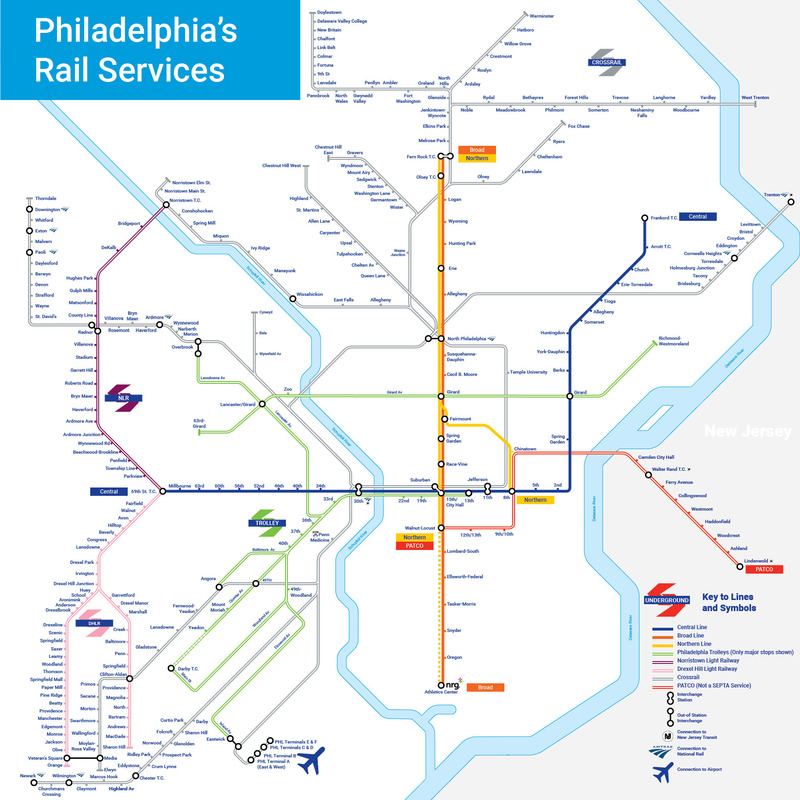 What would you want to see in a new SEPTA transit map? Comment below.