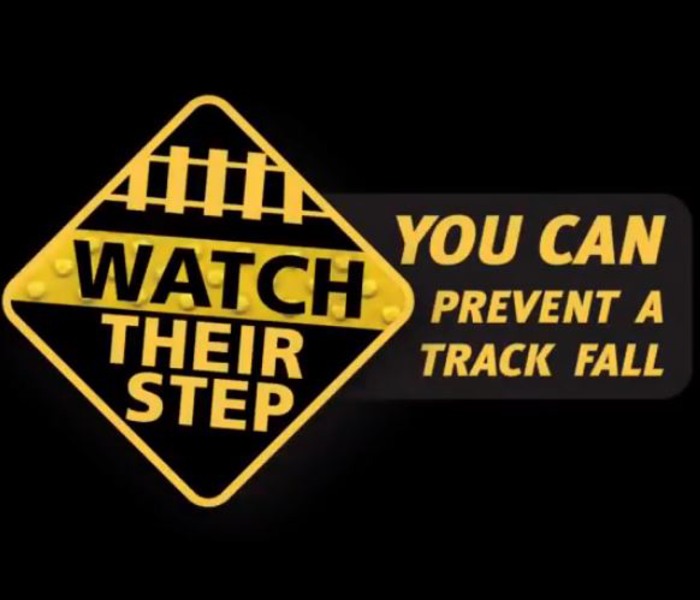 A tragedy on the platform can happen in an instant. Someone might be unsteady on his or her feet, or perhaps so engrossed in a phone call or text message that he or she ignores the yellow tactile warning edge on the train platform, falling into the track area, sometimes just moments before a train is due to enter the station. Oftentimes, these dangerous behaviors are exhibited before the person reaches the platform. The quick thinking and proactive response of other customers can prevent serious injuries or, in some cases, death.

"This year, we've had incidents every month where someone has fallen into the track area on the Market-Frankford Line or Broad Street Line," said Jim Fox, SEPTA's Assistant General Manager of System Safety. "Fortunately, those falls did not result in any fatalities. Our police and safety officers want to prevent tragic situations and are asking the public for its assistance."

To remind customers of what they should do if they see someone acting in an unsafe manner near the platform edge, SEPTA has launched a new component of its safety awareness program - the "Watch Their Step" campaign.

"We count on our customers to help be the eyes and ears of the system," said SEPTA General Manager Jeffrey D. Knueppel. "Through this campaign, we are making riders aware of risky behaviors and letting them know the steps they should take to help save a life."

Unsafe behaviors include leaning into the track area to look for the next train; staring at a phone and not paying attention to one's surroundings; listening to music at a loud volume thus blocking out other sounds in a station; being under the influence of a substance; and being unsteady on one's feet for medical or other reasons.

"If you spot someone who looks like they might be in trouble or is not paying attention, try alerting them before they get to the platform's edge," said Fox. "If they do not respond to your warning, contact SEPTA personnel immediately." Customers should look for SEPTA staff on the platform or for the station cashier, use the yellow emergency call box located on the platform or call SEPTA Transit Police at 215-580-8111. Riders can also use SEPTA's new Transit Watch app, which provides direct communication with the Authority's Transit Police Department. (Instructions on how to use the Transit Watch app are available here.

"The quicker you reach out to SEPTA personnel, the faster we can assist that person," said SEPTA Police Chief Thomas Nestel III. "Messages from the Transit Watch app and calls from the emergency boxes are answered in the SEPTA Police Command Center. Our officers are sent to the scene immediately."

Messages and calls from the Transit Watch app and emergency boxes alert SEPTA's power and train dispatchers to stop trains and turn off power to the third rail. "Not only are we concerned about a person in the track area being struck by a train, but the electrified third rails on the Market-Frankford and Broad Street Lines carry 700 and 600 volts, respectively," Nestel said. "Someone who has fallen into or entered the track area could be seriously hurt, or possibly electrocuted, if they make contact with that rail."

Nestel added that customers that see someone in the tracks should not jump off the platform to get them. "You could make contact with the electrified third rail or injure yourself and not be able to get out before a train comes."

For more information about SEPTA's Watch Their Step campaign and to view a video about the campaign, visit www.septa.org/safety/watchtheirstep.html.