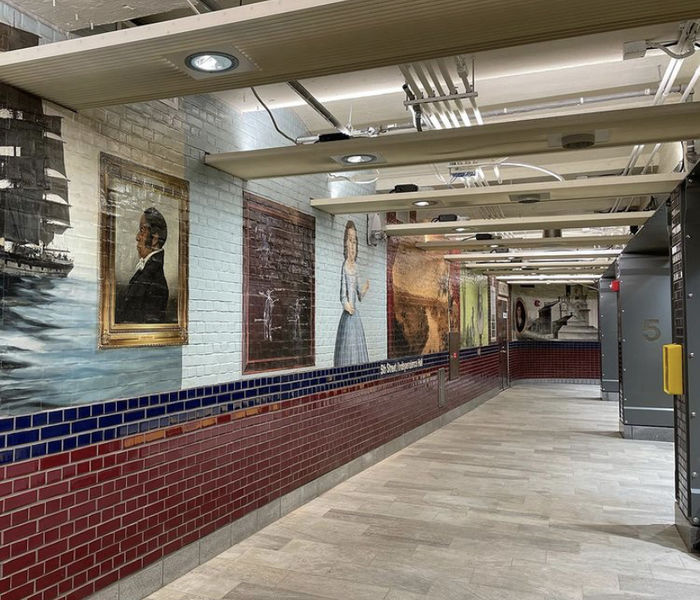 In connection with the complete reconstruction of the 5th Street-Independence Hall Station on the Market-Frankford Line, SEPTA held a public competition for a major art installation.

This is part of SEPTA’s continuing Art in Transit program, designed to enhance the customer experience for SEPTA’s hundreds of thousands of daily riders, and serve as a visible link to nearby community landmarks.

5th Street-Independence Hall Station is the 20th station to receive a major artwork installation, with more planned in the future.

Tom Judd’s Portal to Discovery was selected by a panel of judges as being a wonderful evocation of the links between America’s most historic neighborhood and a diverse population over the last three centuries. As Tom noted in his proposal, “This is a place that welcomes people from all over the world, as well as people going to work everyday. Walking around Independence Mall, one is struck by the sound of different languages being spoken. The subway functions as a portal, a place of entry, a modern-day train station delivering its travelers to the historic sites depicting this critical time that changed the world forever."

Tom was born in Salt Lake City, attended the University of the Arts, and has been a Philadelphia-based artist his entire career. His works have been exhibited in distinguished museums and galleries across the country, including New York, Atlanta and Denver. While his primary focus has been mixed oil painting-and-collage, he has worked in a wide range of mediums, including sculpture, photography, film and mural arts, one of which can be seen at 2nd and Arch Street nearby.

Portal to Discovery was recently "unveiled" - so please stop by 5th Street-Independence Hall Station in Old City to experience this unique gallery.